KENNEY, Ill. (WCIA) — A string of burglaries happened in a matter of hours and whoever did it has not been caught yet.

It happened in Kenney early Monday morning. The Dewitt County Sheriff says the suspect (or suspects) broke into a house, two businesses, ten cars, and stole two vehicles to get out of town.

Surveillance video caught a picture of this man. 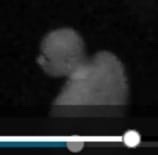 Blood was found where the businesses were broken into and also on the cars that were burglarized. JR Preston is one of the many victims of the string of ten car burglaries. He says, “I can’t believe somebody broke into my car, didn’t steal anything, but just put blood everywhere. There’s blood all over my car.”

The peace and quite was broken in this small village of less than 400 people. But Dewitt County Sheriff Mike Walker says the car burglaries are just part of what happened. He says, “The grain elevator and XL Rail Car discovered that both their buildings had been burglarized as well.”

The doors were kicked in and and the inside was ransacked. Police are unsure if anything was taken. Whoever committed the crimes left a trail of blood across town. Sheriff Walker says, “The Illinois State Police crime scene unit has been here all day yesterday and today doing some work with us trying to pin this down.”

The two cars that were stolen were both later found nearby.

Preston has a parting message for whoever did this. He says, “We’re coming for you, the whole town is looking for you right now. You can’t run and you can’t hide.”

The blood from the scene has been sent to the state crime lab. That will take time to process. But the DNA has to already be on file to make a match.