CHAMPAIGN COUNTY, Ill. (WCIA) — One woman has taken part in every Christie Clinic Illinois Marathon Race weekend since it started, but this year, she’s bringing a little something extra. Whitney Patel has been running for nearly 15-years.

“I wanted to be able to get a suntan and work out at the same time. Not the most grand reason, but yeah, there it is.”

Even though she says she’s embarrassed to admit the initial reason for starting, she stuck with it. And, coming from a competitive family, it came natural.

“The first one I ran because my dad had run a half and I was like, ‘I’m going to beat your time,’ you known? I crossed the finish line and that was the first year when you went down the south endzone and ran the full length of the field which felt like running on sand and then the 50-yard dash back south and, I swore I was never going to run anything again.”

But, the next year, she signed up for the full marathon and she’s been a part of every Christie Clinic Illinois Marathon weekend since.

“Even though people who don’t really run, but live on the race route, and you see them out there cheering. You know, some people have water, some people have little tissues they’re handing out. There’s this lovely house between mile 21 and 23 that hands out little dixie cups of beer.”

But, this year, she won’t be grabbing a beer.

“My husband’s going to go ahead and do it with me as well, so we’ll probably walk, maybe walk/run, but neither of us is probably going to be running the whole race.” 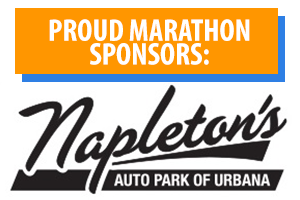