by: Robert Duffer - The Car Connection

The redesigned 2023 Kia Niro Hybrid gets bigger, bolder, and mostly better for its second act. The tall hatchback comes only with front-wheel drive and a choice of hybrid, plug-in hybrid, or electric powertrains. I recently tested the most accessible and least expensive iteration, the 2023 Niro Hybrid.

On a long weekend away, the top Niro SX Touring proved roomy enough to haul two of us and a stinky load of hockey goalie gear, comfy enough to allow that goalie to sleep most of both ways, and efficient enough to justify its higher price over the first-gen Niro that launched in 2017.

The powertrain is mostly the same, but efficiency improves due to upgrades to the cooling and friction elements, Kia says. The 1.6-liter inline-4 carries over with a 32-kw electric motor sandwiched between the engine and a 6-speed dual-clutch transmission. It makes 139 hp and 195 lb-ft of torque, and a drive mode button on the steering wheel toggles between Eco and Sport modes. The Niro is designed for the former.

Like the Toyota Prius, the Niro Hybrid is slow. Like 10-seconds-to-60-mph slow. Passing moves require careful consideration of life’s wants and needs. Yet for drivers who prefer calm to chaos, the quiet cabin and almost unnoticeable shifts of power give it a smooth confidence that compensates for its lack of power.

The paddle shifters on the back of the steering wheel give drivers the choice in how to maximize the Eco or the Sport modes. Same as its predecessor, when in Eco mode, the paddle shifters enable three regenerative braking settings. Typically, it’s a feature reserved for plug-in hybrids and electric vehicles. In the Niro Hybrid, pull and hold on the left paddle to access a fourth mode dubbed Max that comes to a full stop for one-pedal driving. It proved hard to modulate in my testing. At slow speeds coming into a stoplight with the highest regen setting already activated, it was doable, but I didn’t have confidence doing it with congestion. Might be a me thing.

On the other hand, in Sport mode, the paddles become traditional shifters to toggle through the 6-speed dual-clutch automatic. It’s fun, and puts more power in the driver’s hand. Another clever duality occurs on the digital temperature control panel. Press the arrow and the display turns to buttons for the infotainment; press the fan icon and the display switches to climate controls. 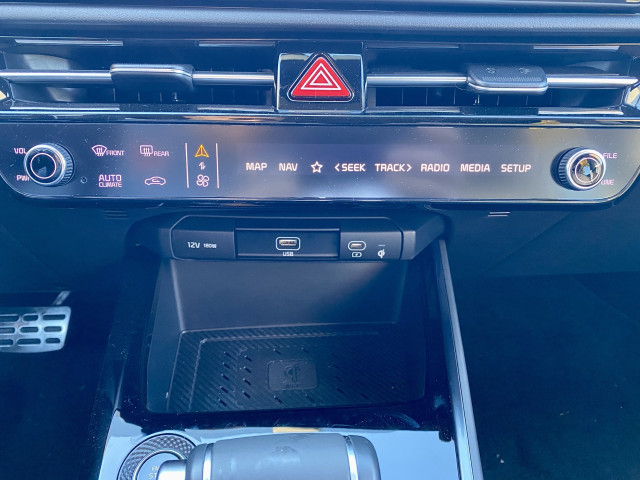 Even though the powertrain remains mostly the same, the EPA-rated fuel economy increases at least 3 mpg to 53 mpg city, 45 highway, 49 combined with the 18-inch wheels on the tester. (It’s 53 mpg combined on standard 16-inch wheels). But we didn’t come close to that, averaging under 40 mpg on highway speeds that averaged 75 mph. Blame it on the hockey gear.

The rating trails the Toyota Prius but the 2023 Niro Hybrid is a much more attractive vehicle, and the design changes have a more significant impact on the increased efficiency over its predecessor. 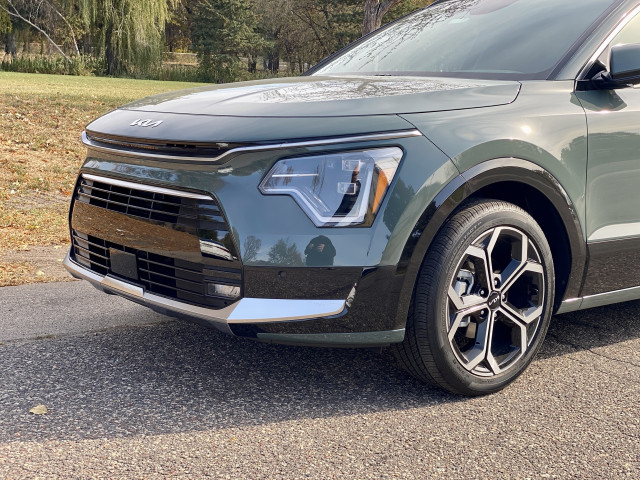 Kia restyled the Niro for a more standout presence. Chunky LED headlights with running lights like mascara underliner flank a thin upper grille that gives way to a widemouth lower grille. Shiny gloss black cladding covers the bumpers and runs over the round wheel arches and down the rockers before abruptly ending before the rear wheels, where the two-tone exterior elements get interesting if not polarizing.

In the tester, a black boomerang frames the rear, running from the roof down to the rear wheel like a stirrup. It’s not just another quirky Kia design element. It’s an air blade with small inlets and outlets meant to channel air from the sides and past the tailgate to reduce aerodynamic drag. 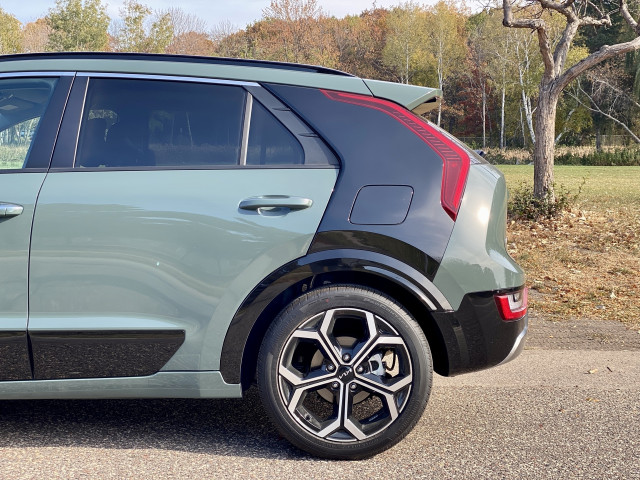 There’s a design function, too. It replaces the rear quarter window that often frustrates or inspires designers to create such things as floating roofs or quirky kinks, especially on the smaller real estate of a small crossover.

My son and his grandfather liked the distinction of the air blades, while the women that I asked responded by asking why. It stood out in bright light, but retreated at certain angles to blend in with the Cityscape Green of the tester.

The Niro’s air blade serves another purpose by visually distinguishing it from other small crossovers and hatchbacks, including the Kia Seltos. The Niro has grown considerably since the first generation.

At 174 inches, it’s 2.0 inches longer than the Seltos, and the 107.1-inch wheelbase is nearly four inches longer. The Seltos still sits nearly three inches taller, so the Niro retains its squat stance, though it’s 2.5 inches longer and much roomier than the 2022 Kia Niro.

The cargo volume behind the rear seats grows 3.4 cubic feet to 22.8 cubes, and the wide opening made it easy to fit my daughter’s massive hockey goalie bag, with leg pads stuffed inside. The lower load floor of the Kia Soul is more hockey and dog friendly, however.

Folding down the 60/40-split rear seats expands the cargo room 9.2 cubic feet to 63.7 cubic feet total. With the seats up, rear-seat passengers have 2.4 inches more leg room to 39.8 inches, which is better than the second rows in many three-row crossovers. Head room is mostly good too, but one caveat back there is the hard plastic seat backings are unforgiving for bonier knees. This might be a plus for front seat riders, however. 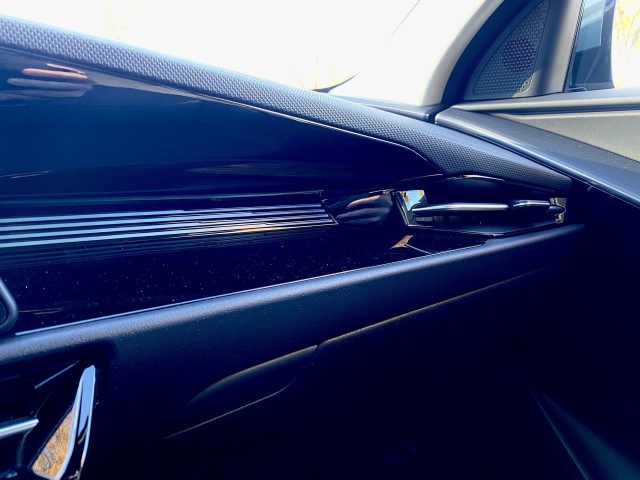 Up front, Kia channels the EV6 with a long, low, horizontal dash fronted by a 10.3-inch digital instrument cluster and 10.3-inch touchscreen in all but the base models. The infotainment system and cluster display are bright, neat, and intuitive, for the most part, but Kia overdoes the black-gloss plastic on the dash trim, door panels, center console, everywhere. After a week of testing it had more fingerprint smudges than a crime scene at an MDMA rave.

Kia says the interior is finished in sustainable materials such as recycled wallpaper for the headliner and seat upholstery made from eucalyptus leaves. I wish they’d recycle the gloss black plastic for something softer, cleaner, less smudgier.

One thing holding back the old Niro was a four-star safety rating from the NHTSA and a lack of standard driver-assist features. Crash-test results are pending, but Kia equips the 2023 Niro with automatic emergency braking with pedestrian detection, active lane control, blind-spot monitors, a safe-exit monitor so you don’t open the door into a cyclist or vehicle, and a rear occupant alert system. The top-line tester added adaptive cruise control with active lane control that enabled hands-free driving for nearly a minute on long straight highway stretches.

The 2023 Kia Niro Hybrid is hard to beat for small crossover efficiency without a plug. A slightly smaller fuel tank (down from 11.9 gallons to 11.1 gallons) translates to a range of about 540 miles per tank, so we didn’t have to stop much on our road trip. The EPA estimates that the 2023 Niro Hybrid will save about $4,750 in fuel costs over the next five years compared to the average new car, and that relatively low cost of ownership will especially favor drivers who log more miles around town than on the highway.

The 2023 Niro Hybrid starts at $27,785 including a $1,295 delivery fee, while the SX Touring I tested cost $36,435, including $195 for the black C-pillar. It’s sharper than a Prius, better equipped, fresher, and in a segment most shoppers prefer. It may lag the Prius in efficiency, and its polarizing style might turn away some shoppers, but the 2023 Niro makes a ton of sense if you’re not ready for a plug.

U of I Prairie Research Institute breaks ground on …

Brad Underwood not sure who to rely on in big games

U of I Prairie Research Institute breaks ground on …

Boyer wins Athlete of the Week

IHSA says board is excited to bring state finals …

Another staffing shake-up for Vermilion Regional …

U of I students rethink safety after sexual assaults