Dodge briefly considered building a sports car in the early 1950s, but the project only resulted in a single prototype. Today, the 1953 Dodge Storm Z-250 is in the collection of the Petersen Automotive Museum, which recently produced a video on this unique car presented by Leslie Kendall, the museum’s chief historian.

Imported European sports car became popular in the U.S. after World War II, leading the Detroit automakers to contemplate homegrown alternatives, including the Chevrolet Corvette and Ford Thunderbird, which launched in 1953 and 1955, respectively, along with some lower-volume models. Chrysler didn’t produce an equivalent, but it did contemplate one. 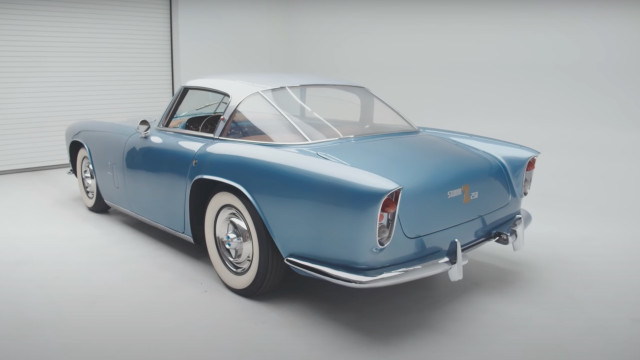 The Dodge Storm Z-250 was the brainchild of advertising executive Fred Zeder, whose father (also named Fred) was a key figure in the early days of Chrysler and had worked on the Airflow models. The younger Zeder specified a Hemi V-8 and a tube-frame chassis with interchangeable bodies—one for on-road touring and one for racing.

The Bertone-designed body shown here was designed to be removed by unscrewing just four bolts and replaced with a lighter fiberglass body for racing. It’s unknown if the fiberglass body was actually built, Kendall noted. The car was originally white with a black roof, with different hub caps than the ones currently fitted.

The Storm appeared at the 1953 Turin auto show, but it may have made other undocumented show appearances as well. It made quite a splash when Zeder parked it outside his Manhattan office, attracting so much attention that police got involved, Kendall said.

Chrysler did consider a production version, but only briefly, Kendall said. The Storm was placed into storage, then acquired by Zeder outright. He later donated it to a college, but reacquired it, replacing the original engine, which was no longer working at that point. He also had the car repainted to its current color and added the current hubcaps during that second period of ownership. Eventually, he donated the car to the Petersen.

This is no mere show car. Before it was ensconced in the Los Angeles museum, Kendall said Zeder took him for a ride around Palm Springs, laying patches of rubber and sliding through corners.

Chrysler did eventually launch a Dodge-branded sports car, albeit without the interchangeable bodies. The Dodge Viper launched in 1992 and kept the Corvette honest until its discontinuation in 2017, just as the Storm Z-250 might have done if Chrysler executives had made a different decision four decades earlier.

Plans move forward for Urbana solar farm that could …

Champaign community raises $25,000 and counting for …

‘It means everything to me’, Rantoul school nurse …

Luke Goode available to play at Iowa after missing …

“It means everything to me”: School surprise leaves …

How to protect yourself and others from extreme cold …

Shopping tips to get through the winter storm in …